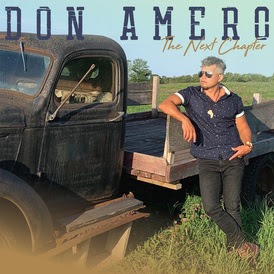 AMERO DEBUTED A MEMORABLE PERFORMANCE OF “ON DOWN THE ROAD” DURING THE CCMA AWARDS BROADCAST ON SEPTEMBER 27TH, AND IS CURRENTLY A SEMI-FINALIST IN THE SIRIUSXM TOP OF THE COUNTRY COMPETITION
“The Next Chapter”, the new album from multiple JUNO-Award nominee Don Amero is available now via MDM Recordings Inc./Universal Music Canada. “The Next Chapter” marks a pivotal milestone in Amero’s career, simultaneous looking towards the future while re-examining the past and is his first full-length project since inking his deal with MDM Recordings. Amero debuted the track “On Down The Road” with a memorable performance during this weekend’s CCMA Awards broadcast, and on Friday took part in the SiriusXM Top of the Country competition, performing as a semi-finalist and vying for the grand prize of $25,000.
“This album truly is ‘The Next Chapter’ for me,” says Amero. “It is my first official label release, it’s fully country and it’s setting me on a brand new path in the world of music. Already this new music has opened up new doors to me and I am excited for you all to dive into this Next Chapter with me because I sure didn’t get here alone!”
An engaging storyteller, singer-songwriter and performer, three-time JUNO Award nominee Amero has been tirelessly touring, performing and speaking across Canada for the last decade, earning the respect and attention of the Canadian Music industry and fans alike. With a proven ability to effortlessly and genuinely connect with his audience, his talents have been much sought after, and in early 2019 he became a part of the MDM Recordings Inc. roster. Amero, who is of Cree and Metis heritage, has been recognized for his work as an amplifier of Indigenous thought and ideas, and hopes to continue the work being done when it comes to building bridges between all communities in Canada.
“Music Lover”, Amero’s debut single after signing with MDM, was released in June 2019 and landed in the number one spot on the Indigenous Music Countdown, with the re-release of his album “Amero Little Christmas” following shortly after in October 2019. Delivering uplifting beauty across seven albums, Amero creates a lasting impression, with an artistic focus in making music that he hopes will be medicine for others. Earlier this year, Amero dropped “Morning Coffee” and “Wouldn’t Be Home”, and his latest single, the upbeat toe-tapper “Wasn’t The Dress” was released September 4th.
Check out Amero’s online exclusive with ETCanada.com about his appearance on the CCMA Awards and his role as an Indigenous artist in Canada HERE.
DAVID JAMES DELIVERS “THEN THERE’S YOU” FEATURING GENEVIEVE FISHER
Tyler Joe Miller Nominated for the Rising Star Category at the 2020 CCMA’s
CONTACT / CHARITABLE REQUESTS